I’ve honestly never played a Pokemon Mystery Dungeon game and I’m always down to try something new, even if it’s not what I do so I gave this a try, finished it, and now I will give my review~

Pokemon Super Mystery Dungeon is a dungeon-crawling, RPG, rouge-like video game, developed by Spike Chunsoft and published by The Pokemon Company, released for the 3DS in November of 2015.

In the beginning of the game, you take a life quiz which is kinda like a personality test and this test will figure out what starter Pokemon you are out of 20 (18 are starters from the 6 generations and the other 2 are Pikachu and Riolu). After my personality test, I got Bulbasaur, which is perfect because he’s my all-time favorite starter Pokemon (if you didn’t like the Pokemon you got from the test, you can choose your own). After you take a test, the game will randomize a partner for you but you can also choose your own. I chose Mudkip, which is another childhood favorite.

After you choose your Pokemon, you wake up near a waterfall with no memory of who you are and you’re shocked as you see your reflection in the water, then you are chased by Beheeyem and Nuzleaf comes to the rescue and flees with you. After this scene, you enter a dungeon and Nuzleaf gives you a tutorial of the game. After the tutorial and you escape the dungeon, you head to Nuzleaf’s house and you stay there.

When you wake up the next morning, you will be greeted by your partner and they will tell you that it’s time for school. After school, you meet the Dashing Wanderer, an Ampharos, and suddenly, there’s news going around that the Big Boss of the Northern Seas, a Wailord, turned into stone and the Dashing Wanderer escapes, dropping the Connection Orb, which allows you to connect with other Pokemon through jobs. 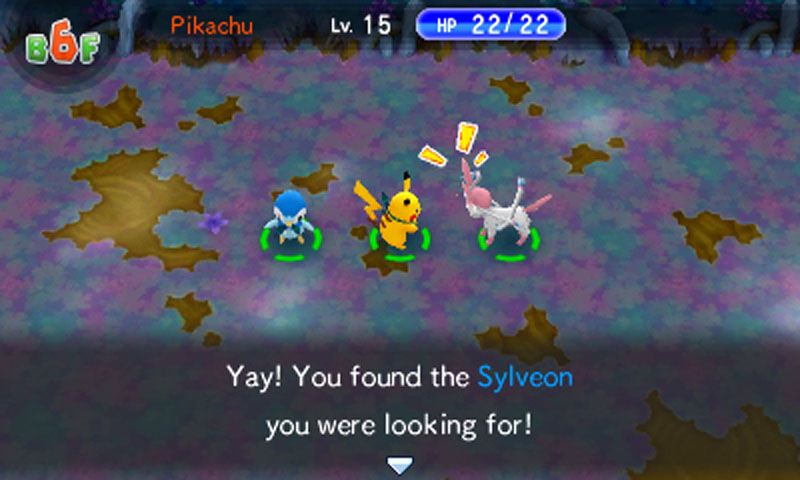 You journey through many dungeons filled with enemies and traps and you go out and save the Pokemon world. This game has 720 Pokemon as of 2015 so that includes the Legendaries, Eevee Evolutions, and the Mega Evolutions, which is actually pretty cool to me. This game was actually enjoyable for it to not be an actual Pokemon game but I think this is more for the younger audience (I know my 7-year-old cousin would LOVE this). Also, it wasn’t challenging to me and very repetitive, but it is on the lighthearted side so it was something I enjoyed. I don’t know if the other Pokemon Mystery Dungeon games are like that.

Have you guys played this game or any other Mystery Dungeon games?